BRIVIACT® (brivaracetam) CV is indicated for the treatment of partial-onset seizures in patients 4 years of age and older.

BRIVIACT® (brivaracetam) CV is indicated for the treatment of partial-onset seizures in patients 4 years of age and older.

See Prescribing Information
Approved For Pediatric Patients (4 Years of Age and Older)
WHEN WOULD YOUR PATIENTS WANT A FULL THERAPEUTIC DOSE?
BRIVIACT®
THE ONE THAT STARTS DAY ONE.1

BRIVIACT® (brivaracetam) CV is indicated for the treatment of partial-onset seizures in patients 1 month of age and older.

IN A PRECLINICAL DISCOVERY PROGRAM, THE AFFINITY OF RACETAM ANALOGS FOR SYNAPTIC VESICLE PROTEIN 2A (SV2A) STRONGLY CORRELATED TO THEIR ANTICONVULSANT ACTIVITY IN AN ANIMAL MODEL4-6

The most promising compounds were profiled in a broad range of animal models of seizures and epilepsy4,5

BRIVIACT displays a high and selective affinity for SV2A in the brain, which may contribute to the anticonvulsant effect1

*Levetiracetam is a product manufactured by UCB.

Suicidal Behavior and Ideation: Antiepileptic drugs, including BRIVIACT, increase the risk of suicidal behavior and ideation. Monitor patients taking BRIVIACT for the emergence or worsening of depression; unusual changes in mood or behavior; or suicidal thoughts, behavior, or self-harm. Advise patients, their caregivers, and/or families to be alert for these behavioral changes and report them immediately to a healthcare provider. 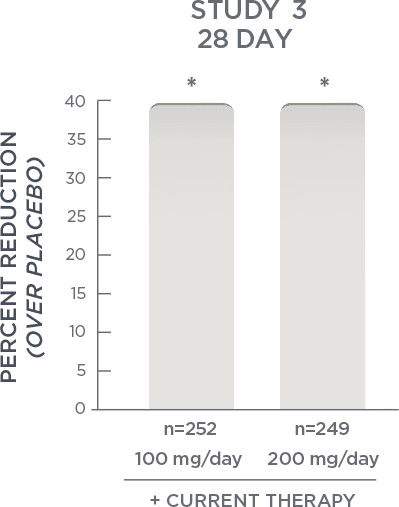 Statistically significant based on testing procedure with alpha = 0.05.

BRIVIACT® was studied in a challenging patient population 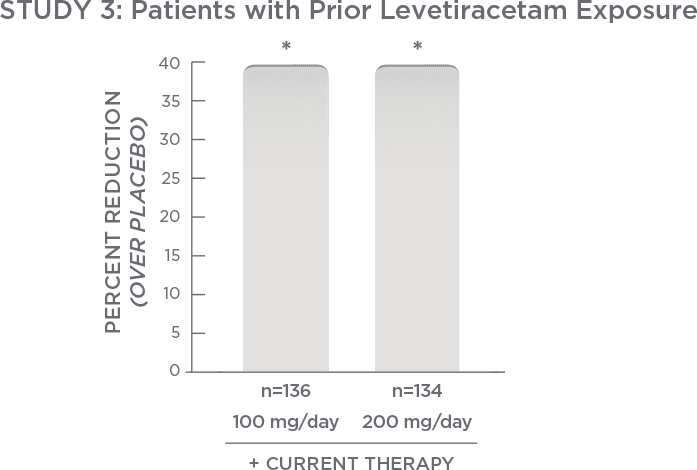 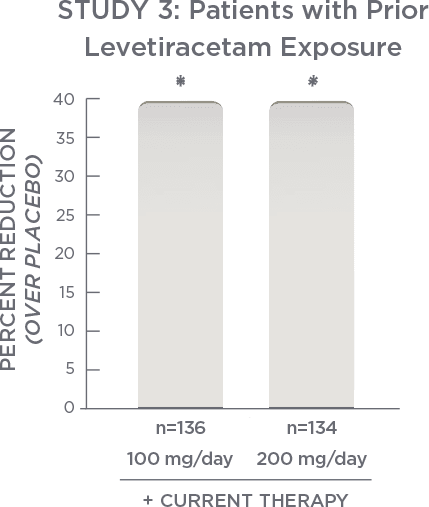 Statistically significant based on testing procedure with alpha = 0.05.

Patients had to discontinue levetiracetam use more than 90 days prior to screening.

Withdrawal of Antiepileptic Drugs: As with all antiepileptic drugs, BRIVIACT should generally be withdrawn gradually because of the risk of increased seizure frequency and status epilepticus.

Brivaracetam as adjunctive treatment for uncontrolled partial epilepsy in adults:

Antiepileptic drugs, including BRIVIACT, increase the risk of suicidal behavior and ideation

Causes somnolence, fatigue, dizziness, and disturbance in gait and coordination

Can cause hypersensitivity reactions; bronchospasm and angioedema have been reported

The most common adverse reactions (at least 5% for BRIVIACT and at least 2% more frequently than placebo) are1:

Adverse reactions reported in clinical studies of pediatric patients 4 years to less than 16 years of age were generally similar to those in adult patients. 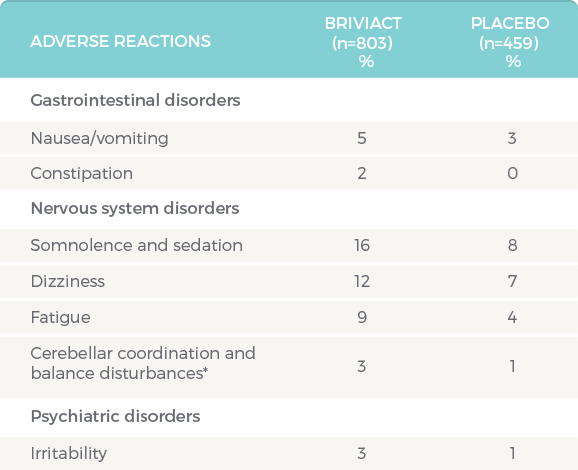 Across all 3 trials, discontinuation rates due to adverse events were1:

The most common adverse reaction leading to discontinuation was dizziness.3

BRIVIACT® offers a therapeutic dose on DAY ONE

Gradual dose escalation is not required with BRIVIACT

The recommended dosing regimen is dependent upon body weight and is only recommended to be administered orally. Please click here for the dosing information in the Prescribing Information.

BRIVIACT® is available in multiple formulations, allowing for dosing flexibility

Considerations for tablets and oral solution1

Considerations for intravenous (IV) use*1

BRIVIACT injection may be used when oral administration is temporarily not feasible.

Adverse reactions with BRIVIACT injection are generally similar to those observed with BRIVIACT tablets and also include dysgeusia, euphoric mood, feeling drunk, and infusion site pain. 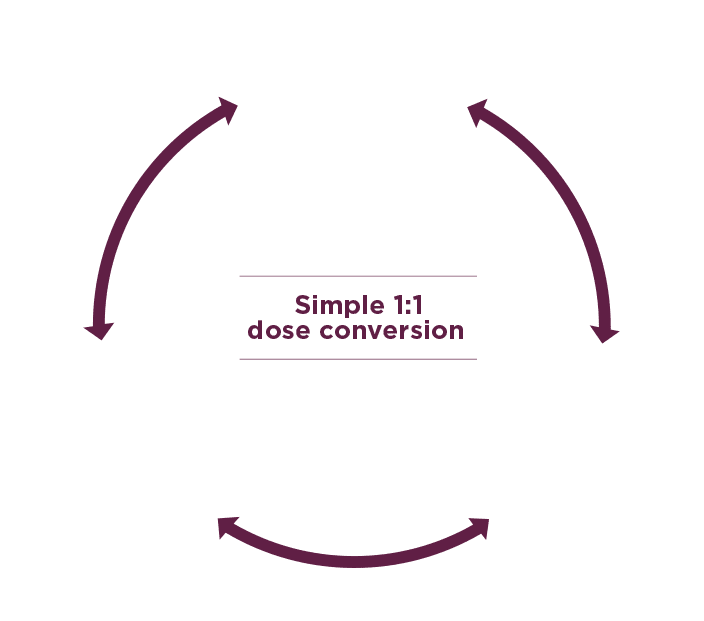 †10-mg tablets are available for down titration. 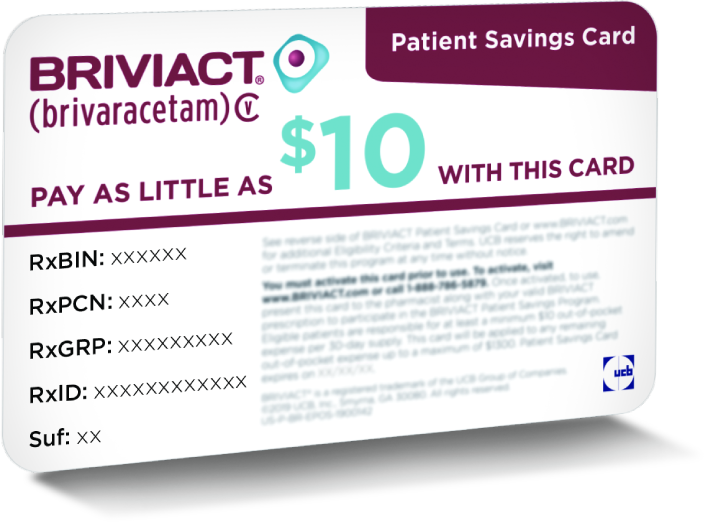 Ask your sales representative for details about the program.

When a prior authorization is required, PARx Solutions® and CoverMyMeds® can provide assistance

PARx Solutions and CoverMyMeds offer prior authorization (PA) assistance through an electronic-based system that standardizes the medical necessity request process for most insurance providers, and for patients with commercial, Medicare Part D, and Medicaid coverage*

When a prior authorization is needed, PARx Solutions and CoverMyMeds can provide assistance.

Get started in 4 simple steps:

Financial assistance may be available for BRIVIACT® patients

The BRIVIACT Patient Assistance Program may be able to help if your patients do not have health insurance or if they are a Medicare Part D recipient and cannot afford BRIVIACT. Eligible patients are provided a free 6-month supply of medicine and can reapply every six months for continuing support.

To learn more about the BRIVIACT Patient Assistance Program or to find out if your patient might be eligible for assistance, please contact UCBCares at 1-844-599-CARE (2273) or UCBCares@ucb.com, or click below to get started.

Contact your representative to receive a patient voucher for a 14-day supply of BRIVIACT.

for Pediatric Patients 1 month of age and older

BRIVIACT is now approved for pediatric patients 1 month of age and older. Available in oral solution, tablets, and IV* formulations.
Additional information coming soon to our website. Please check back often for updates.
*For use when oral administration is temporarily not feasible.

In adult adjunctive therapy placebo-controlled clinical trials, the most common adverse reactions (at least 5% for BRIVIACT and at least 2% more frequently than placebo) were somnolence and sedation, dizziness, fatigue, and nausea and vomiting symptoms. Adverse reactions reported in clinical studies of pediatric patients were generally similar to those in adult patients. Adverse reactions with BRIVIACT injection in adult and pediatric patients were generally similar to those observed with BRIVIACT tablets.  Other adverse events that occurred in adult patients who received BRIVIACT injection included dysgeusia, euphoric mood, feeling drunk, and infusion site pain.